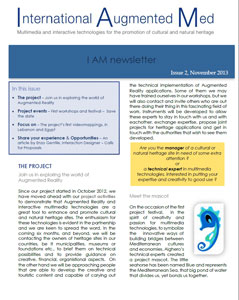 From the world of Augmented Reality and Interactive Design by Enzo Gentile – Interaction Designer and technical expert for the I AM Lead Partner, City of Alghero.

The new Kinect 2 is coming…
If you are a computer game enthusiast, you are probably familiar with the Kinect, a dedicated device to interact with your game in a natural way. Interaction designers use it instead as a cheap device for “motion tracking”, body, face and voice recognition. It opens up an exciting world of opportunities for performers and artists,
enabling them to directly interact with computers, devices, lights and sounds.
The Kinect is able to detect the movement of the human body without any additional equipment or sensors on the body. Skeletal Tracking (25 points) allows it to “recognize” people and their gestures. It has a high definition camera, infrared sensors to determine depth as well as a sophisticated system of microphones to detect and calibrate the surrounding environment so as to recognize voice commands correctly.

With specific drivers, the Kinect can be used on PC, Mac as well as Linux platforms. The use of video cameras, motion tracking sensors and sound reactive equipment is not new for performers and artists. Such
systems were however always limited by their accuracy and by delays in response time, caused by environmental interference (surrounding light and noise).
The complexity of connections (radio, infrared or cable) often made the situation worse.

The Kinect solves most of these problems. Its main advantage, compared to a normal infrared camera, is the ability to discern depth, enabling high precision tracking. The infrared ignores what is projected and any surrounding lights, focusing exclusively on the person, independent from its context.
The device can track 3D objects as well as the entire scene. More specifically, it builds a virtual skeleton that reproduces the main movements of the person with a response time that is acceptable for any live performance.
I look forward to working with the new and improved Kinect, coming out in a few days, which has several improved characteristics such as an improved, full HD camera and an additional infrared senor for low light
situations. It is a fascinating technology that opens up endless possibilities in many fields.